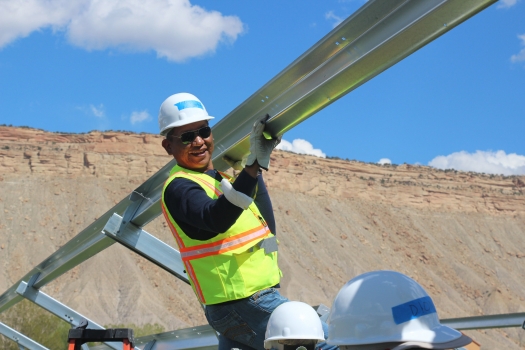 ESI and its parent entity, the Microgrid Systems Laboratory, along with the Rochester Institute of Technology and Navajo Technical University, have been awarded a grant from the Public Interest Technology University Network (PIT-UN) program to further the partners’ work with Native American and Alaska Native communities in the tribal energy sovereignty area. PIT-UN’s mission is to help advance the field of public interest technology to bring positive impact to communities around the globe.

This project has three primary objectives to develop decentralized, renewable energy technologies as public interest technologies to support Tribal sovereignty and energy transitions in Native American Nations. The first objective is to support research on the topic of energy sovereignty through direct engagement with Tribes to establish a common understanding of what it means for a Tribe to be energy sovereign from an Indigenous person’s and Tribal values perspective. The second objective is to develop a network to support education within Tribal Nations to create awareness around renewable energy technologies and support the development of an Indigenous workforce to lead energy transitions and public interest technology innovation in their own communities. The third objective is to advocate for the adoption of renewable energy as a public interest technology to support the development and reinforce the sovereignty of Native Nations in the United States.

The starting point to understanding renewable energy as a Public Interest Technology in service to indigenous communities is to research the needs and values of these communities from their own perspective. A foundational aspect of Native American Tribes in the United States is their recognition as sovereign governments with a right to govern their internal affairs. Historically, this sovereignty has often been challenged by non-Tribal actors seeking to exploit Tribal resources. Some of the most egregious examples of this involve Tribal energy resources. And despite many Tribes possessing ample energy resource of their own, most Tribes are almost entirely dependent on non-Tribal energy service providers. This external dependence for critical services is often viewed as a limitation on effective Tribal sovereignty. Energy sovereignty is often viewed as a pathway through which Tribes can both reinforce and exert their sovereignty while developing an energy system that is compatible with their values and societal goals.

The results of this research will be published both in an academic journal, but as well in a more accessible format through the ESI website and publications targeting Native audiences. The results of this work will be further disseminated and refined through a workshop to be organized for Tribal leaders and energy professionals.

The partners will lay the groundwork for renewable energy education and workforce training by beginning to build a network among Tribal and non-Tribal colleges, Indigenous energy professionals and Tribal leaders to promote the development of renewable energy courses and the recruitment of Indigenous peoples into training programs that

lead to a career in this field. In the future, with continuing support, the partners envisage developing course curricula on renewable energy technologies that incorporate Tribal perspectives and community specific needs. The project will also produce renewable energy informational videos geared to tribal members, staff, and leaders, in indigenous languages beginning with Dine, with Navajo Tech media arts students.

In order for renewable energy to fulfill its promise as a Public Interest Technology that promotes Tribal sovereignty and development, it is essential that stakeholders and decision makers have access to accurate and relevant information. This project will support further development of the ESI website to host research outputs from the network that this project will begin to develop, including work supported by this grant. The research interviews conducted with Tribes will generate case studies on innovative energy projects being pursued by Tribes across the country, that can guide and inspire other Tribes in pursuing their energy goals. The website will as well host the educational content, in particular the renewable energy videos, that will be developed through the course of this project. This central source of information will establish a virtual gathering point for the Energy Sovereignty network.